Move-O-Scope Visualizes Your (Not so) Secret Life

We are always hungry for data. Small data, “big data” (more on that in a later post), ugly data, crowdsourced data, personal data… you name it. If the data carries meaning, we want to get our hands on it. There are few data sets that have more meaningful value to a viewer, than data about their personal life: what they do and where they go.

That’s why, when the Moves app was released on the iPhone early 2013, we got really excited about what could be done with access to the data. Anticipating that there was going to be an API, we started using the app. In case you haven’t used Moves, it runs in the background of your phone, collecting data about the locations you go to. Moves can automatically—and with a surprising reliability—distinguish the type of activity you’re engaged in, namely whether you’re walking, running, cycling, or using some other mode of transportation. When you stay at a place long enough, the app guesses and tags which place it is. Users can edit these guesses, so that you have a more precise log of your activities. Subsequent visits to the same place are automatically tagged with the correct place.

There are many applications out there that let you track activity, mostly with fitness in mind. RunKeeper or MapMyRun are just two examples. What differentiates Moves from these apps is that the app runs in the background of your phone, collecting information without your having to enter information manually. This combination of passive tracking and occasional manual intervention to improve results lead to a data set that is clean and verified, highly personal, and fairly extensive. If you’ve worked with data before, you come to appreciate data that carries such attributes. How could we not get our hands dirty with this kind of data? The only question was: What kind of visualization should we make?

To get started with a data set, a good chunk of time is required to get intimately familiar with it. We like to refer to this process as dating your data. This includes hunting for the hidden secrets, asking a lot of questions, and getting a feel for how to handle and visualize this particular data set. In the case of your personal activity data that’s, hardly possible because everyone’s data is so different. Let’s be frank – isn’t that what’s so appealing about personal data anyway? What if, then, we allow users to do this kind of exploratory analysis themselves?

Whenever we used the Moves app, we felt like we were not seeing the bigger picture. Moves shows you one day at a time as a storyline. This gives you a good sense of what happened that particular day, with a focus on individual activities and places. It is, if you will, the microscope of your daily whereabouts. What we wanted to build is an exploratory interface that lets you see where you spend your time, and how you get there. 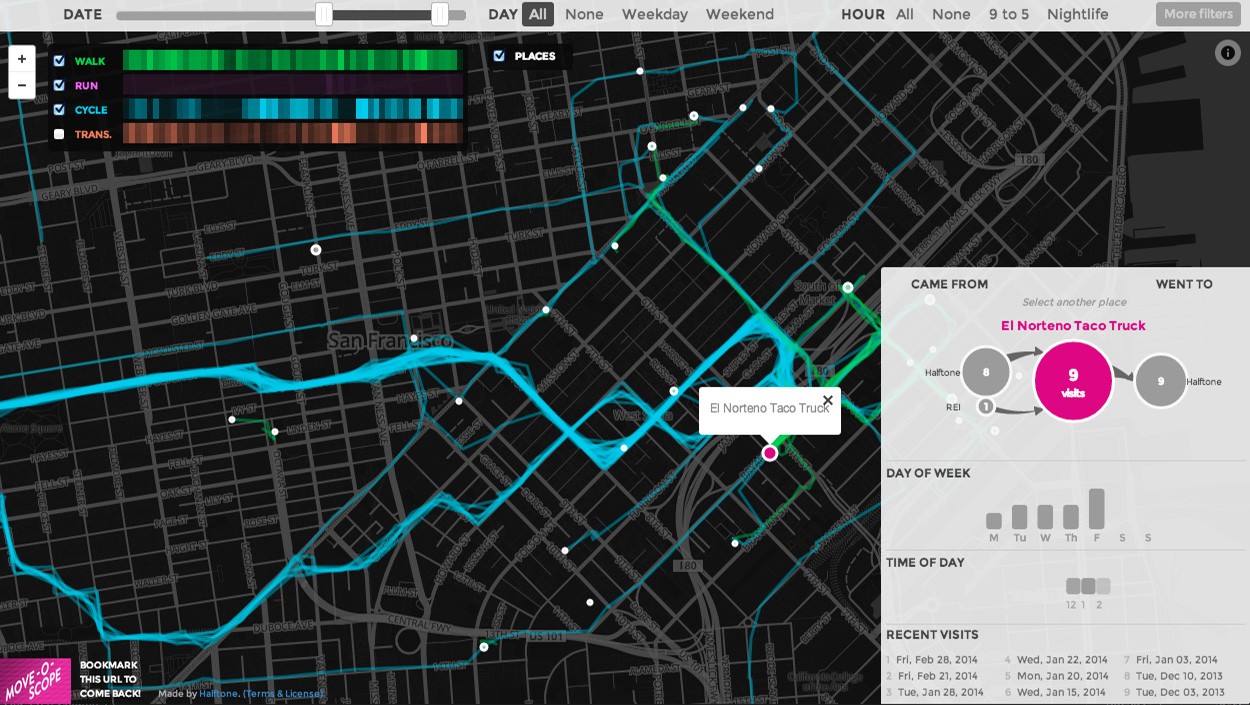 In April 2014, right when we were wrapping up development on Move-O-Scope, Facebook acquired ProtoGeo Oy, the company which developed Moves. When they changed their Privacy Policy and TOS two weeks later, many people were concerned about Facebook having access to their very personal location data. Shortly after, Facebook promised not to commingle their own users’ data with Moves users’ information. While we didn’t create Move-O-Scope with this intention, the app demonstrates just how much information someone with access to your personal data has. Spending a lot of times at the gym? Biking home after a your usual trip to the bar? Not spending as much time at work as you tell your partner? These kinds of things are very easy to identify, and this is just with data that is available through the app’s API, which is presumably only a subset of what’s available from within the company.

While some folks did see these privacy implications, others were just happy see their lives visualized. If you are using Moves, give Move-O-Scope a whirl too.

Where I've walked in San Francisco since Jan 2013 according to @movesapp. Get yours: https://t.co/w14nnplppv pic.twitter.com/DcBtqcowNq

A year of my travels: walking, running, and cycling in Barcelona and around the world. https://t.co/6it9wQXmE8 pic.twitter.com/MZg5Z2I4IB

My movements about town. If you use Moves go and take a look at https://t.co/tCkatmZLuI pic.twitter.com/drJz38gk9J